Survey: Half of IT professionals have adopted Lync/Skype for Business

Following Microsoft’s announcement that it has launched the next version of Lync as Skype for Business, No Jitter conducted a survey to assess enterprise adoption of and attitudes toward the Microsoft Unified Communications (UC) platform and all its various components.

When asked which functions they currently used Lync for, the majority of respondents named presence and instant messaging. This was followed by Web and audio conferencing as well as desktop video.

Using Lync/Skype for Web conferencing typically extends the usage of Lync outside network boundaries and requires action to be taken to secure the deployment as LyncShield does.

At the same time, Web conferencing was seen as the main function used in hosted Skype for Business service, followed by audio conferencing and presence and instant messaging.

Skype for Business will retain all Lync capabilities, including content sharing and telephony, while adding video calling and the Skype user directory, making it possible to call any Skype user on any device.

The struggle to gain personal productivity with Microsoft 365 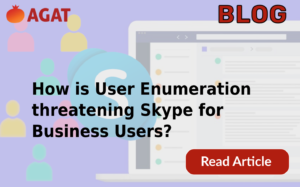 How is User Enumeration Threatening Skype for Business Users?

Skype for Business: How to protect against account lockout through ADFS

SphereShield enables internal use of Ethical Wall for Skype for Business

How to deal with security vulnerabilities while publishing Skype for Business

Survey: only 21% of US businesses use multifactor authentication

Keep your corporate email safe while publishing Skype for Business

How to limit Skype for Business usage only to devices with MDM?

The ultimate Lync security suite for the enterprise market

Get ready for Skype for Business

Survey: 86% of workers use smartphone for personal and work tasks

Mobile security seen as the major IT security risk in 2014

The risks of BYOD policies for businesses